The registration for the IronGirl Triathlon 2012 opened last week and filled up in less than a day. I'm happy to say, I did not sign up. When my husband asked me if I was sad when it filled up I realized there was no part of me that was. None. In fact, I feel like a burden has been lifted off of me. Sad, in a way, but true.
I'm a runner at heart, not a triathlete. I'm okay with that.
Posted by Lisa at 11:09 AM No comments: 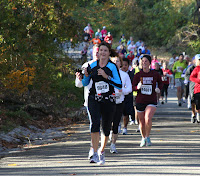 I'm going to try to get this all out before I forget it. Last weekend was the Richmond Half Marathon. Although the details are coming.... I DID IT!!! I broke 2 hours. It was by the skin of my teeth in 1:59:28, but it's official! GOODBYE TWO HOURS!!!
It doesn't matter anymore that I was sick two weeks before the race and missed seven days of running (and coughed up a lung when I did start running again), or that I missed my longest run (the one that was supposed to solidify my confidence). Speaking of confidence, it also doesn't matter that my confidence was shot and I started looking at this race as more of a warm up to the February Princess. None of that matters anymore.
I'll skip all the details, but somewhere in the process of preparing for the race on Friday and Saturday, I decided I just needed to chill and see how it went. My plan was to start out slowly and just see how I was feeling.
Here's the interesting thing. Somehow I lost 9 pounds these past weeks. I've had some stomach issues and have been eating really well to try to figure out what's going on. The significance of that is that for over a year I've been telling myself that the only way I could break 2 hours was if I lost 10 pounds. I don't know why I had that number stuck in my head, but I did. When I was weighing myself the few weeks before the race, I was amazed that the scale was 9 pounds lighter. (I even had my husband weigh himself a few times just to make sure it wasn't wrong.) You'll see why this was significant in a little bit...
So, race day rolls around and I ran with a friend who I've been doing my long runs with. She had no time goal and just wanted to stay with me. I kept telling myself to focus on my pace in the first two miles and not push it. FAIL! We started out way too fast. In the past, when I've done that I've immediately thought "I'm dead" and psyched myself out. I really made an effort to stay calm this time and just focused on each mile. It was really amazing that I could do that. I had my Garmin on so I was really able to know exactly what my pace was and if I was on target.
Things were going really well, but I inevitably started getting tired around 7-8 miles which also were the hilliest part of the course. Every time I wanted to slow down I thought about those 10 (well, 9) pounds I lost and how they weren't holding me back anymore. I was not going to allow myself to get tired and give up. So on I went and as I checked each mile split, I was still in the range. I really started to believe I could do it.
The coolest thing happened at mile 10 which had nothing to do with me. There was a man on the sidelines in a place where it wasn't crowded and he was yelling encouragement to the runners. He said "only a 5K left! NO REGRETS! Do not leave anything out on the course, but give it everything you've got!" Man, did I need to hear that. I'll never know who that was, but "Thank you!". The last two miles were a blur. My running partner ended up tripping and falling between miles 11-12 so I slowed down a bit to let her catch up. The race ends on a down hilll and although I didn't think I had anything left, I found myself sprinting the last .25 miles. I was pretty sure I had it when I crossed the finish line (although the official time said over 2:00, I knew my chip time was delayed). My Garmin actually showed I ran 13.25 miles.
I was so happy! I saw my family at the finish and they were so happy too! I've never had an experience like it. I really felt no pressure or nerves going into the race and I've never had such a good race (feeling wise).
Here are my splits (mostly so I can have them for myself)
Distance 13.25 miles
Average pace 9:01
Mile 1: 8:49
Mile 2: 8:58
Mile 3: 8:50
Mile 4: 8:56
Mile 5: 9:03
Mile 6: 9:06
Mile 7: 8:54
Mile 8: 9:25
Mile 9: 9:02
Mile 10: 9:14
Mile 11: 9:06
Mile 12: 9:19
Mile 13: 8:59
Mile .25: 6:56
Wow- 6:56 for the last quarter mile. Amazing.
I haven't run since Saturday. I'm hoping for a light run in the morning. I printed out a training schedule for the Princess. Only 15 weeks.
Posted by Lisa at 5:07 PM No comments:

I woke up this morning at 7:30 (way late for me!) to the sound of pouring rain. It was a wonderful sound, so soothing. The first thing I did was turn over and determine if me head hurt. It didn't, and still doesn't. Praise God!
Todays agenda: finish homemade chicken soup, make 27 jars of applesauce, take the girls to their music lessons, and be a great homeschool mom. That last one should be first. I need to make up for lost time. We've got some work to do!
Posted by Lisa at 5:00 AM 1 comment:

I woke up this morning and still had a headache. I thought it was better, but once I started moving around I actually got dizzy. Not good. I ended up taking 2 naps before lunch. (Yup, me the one who is supposed to be schooling these children.) We got through doing the bare minimum work.
It's almost 11pm now and the headache is almost gone. I'm confident I'll wake up tomorrow feeling 100%. Here's the problem: I was supposed to run yesterday and today and obviously skipped those two runs (one was going to be speedwork). I have another run scheduled for Thursday and thought I could make one up tomorrow. The problem is it's going to rain. 90% chance when I'm supposed to run. That kind of puts a kink in my plans. Although I want to go to my freaking out place, I'm fighting hard not too. I'm ahead in my training and missing two runs isn't going to make or break me. I'm giving my plantar fasciitis a chance to rest which is probably better in the long run. I'll change my Thursday run and make it longer (it looks like rain then too, but we'll see what happens). If I have to run the half on Saturday without running all week, I'll just look at it as a taper week. It shouldn't be a big deal.
Wow, that sounds so logical when I type it. why do I get so worked up over these things. I'm going to try really hard to look at the positives (like the fact that my headache is almost gone, right?).
Posted by Lisa at 7:38 PM No comments:

I've had a headache the past two days and skipped my run today because of it. I haven't had one in awhile and am starting to notice a pattern between the way I eat and how I feel. (Duh, it's only taken me how long to figure that out?!) I guess it's obvious that I've been eating crappy. Today was a good day (eating wise), but I still have the headache. I guess it's going to take a few days to detox my body. The question I have for myself is "WHY DON'T I EVER LEARN?!" I can't even count the number of times I've been right where I am now: feeling bad and detoxing. Every time I do, I swear I'm not going to let it happen to me again. But here I am again. Why am I so thick headed? I pray that I wake up tomorrow and feel better (and that I learn my lesson once and for all!).
The runs have been going well. I've thrown in some speedwork for the first time. I can feel my PF in my feet (yup, both of them), but it's just talking to me. It's under control for the moment, but if I feel like it's getting worse, I'll bag the speed work. I have a 13 miler this weekend. It's actually a half, but I'm not racing it at all. That's really hard for me since there will be an "official" time, but I need to force myself to do it. I'm less than 5 weeks out and feeling pretty good. I have some important runs coming up. I'm not concerned that I can do the distance, I'm just unsure of my pace. I need to pick it up if I'm going to meet my goal...
Stay tuned...
Posted by Lisa at 6:25 PM No comments:

I've managed to neglect this blog again. Life just continues to consume me. I really want a place where I can look back on my training and learn from it, or even just relive it. I'm currently training for the Richmond Half. The Princess last year was not what I had hoped (I never did post that blog). Let's just say the heat and humidity got to me and I didn't meet my goal. I did the IronGirl again this year (again, not what I had hoped). Realistically I wasn't trained for the tri (might be a good idea to ride my bike on the road more than once before the race next time!)
I've realized that my first love is running. I've know that forever, but injuries led me to triathlons. I hate them. I dread them. I'm not doing them anymore. Just saying that makes me feel better.
So, back to running I go. My half is in 6 weeks and I'm feeling pretty good. I'm not sure I'll be 100% prepared to go for my goal (sub 2 hours), but I'm going to train like I am. My biggest obstacle is my mind. I'm struggling with confidence, but I'm working on it. As I get older, I find I have less ability to push myself through the tough parts of a workout. Oh, to be young and fearless!
Anyway, I'm going to try to blog from here on out. If for nothing else to be able to look back on my training and tweak it if I need to before the Princess in February, because that 2 hour mark is going down!
Posted by Lisa at 11:10 AM No comments:

Trying to pull myself out of the funk

I've been in a funk since getting back from FL. It's been really bad. I've really tried to reflect on what is going on but I can't seem to get my finger on it. I think part of it was Florida was exhausting. I came back tired and life just took over from there. I didn't meet my half marathon time goal (more on that later) so I think there was some disappointment looming from that too. My eating has been horrible and I haven't been exercising. (Actually that's not totally true. This week I started eating much better and have exercised 3 out of the last 4 days. I can't say I feel better yet, but at least it's a start.)
I don't like where I am right now and am hoping for better days to come.
Posted by Lisa at 4:17 PM No comments: 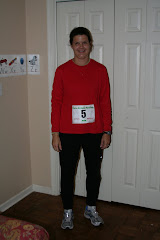 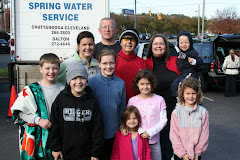 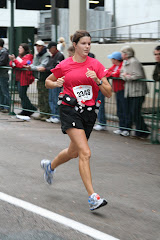 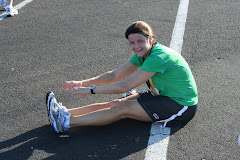 Can you find me?